I interrupt my blog for 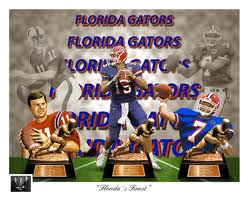 yes I wanna talk about this because I am a ginormogantuan Gator fan. our head coach Urban Meyer is leaving. I don't know where he's going all I know is he's going. and that's bad. I have Gator coach abandonment issues. I was not happy when my favorite coach Steve Spurrier left in...whenever. I was pregnant with Maddy so it was 01 or 02 (I rooted for him this season when they played UF. He SO deserved it). then his replacement left. and now Urban Meyer is leaving. I don't think I'll be as upset at this leaving as I was when the Old Ball Coach left because I feel like Coach Meyer gave up on the Gators. that's my opinion only but I do. it seems like he felt that they couldn't win so he gave up. and I admit it has been a season of average. there was no Made of AWESOME Timmy and that left the team without a leader and a motivator and things just didn't go well. maybe the coach didn't know how to deal with that. I don't know. but I do know that leaves a team with a crappy problem before finals and before a bowl game. poor Gators. poor kids. maybe it's karma punching the Gators in the face for all the obnoxious fans and so on but dang. there's no joy in the Gator Nation today. or for a bunch of days.
okay, back to my normal foolishness. make sure you comment to be entered in the giveaway with author Scott M Baker. good stuff being given away!!
Posted by Alison at 4:56 PM