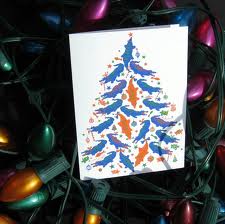 look at those cards. orange and blue gators making up a Christmas tree. why now THAT'S art. no not really but I wish I had those. today I did my Christmas cards. they weren't gator cards they were a mix of cards that I had accumulated over the years. well, I had set up a system for addressing stamping stuffing and then sealing the cards. all went well until I noticed that several of my cards (older ones) had been "written" on by Maddy when she was two or so. there were scribbles on the inside. no doubt I had given them to her to do while I was trying to get mine done back then and then just put them in the box and forgotten about them. so I ended up with a bunch of stamped and addressed envelopes with no cards. I found some that would fit but you can clearly tell that they don't go with the envelopes. and this year I was trying to be more orderly and together. so much for that. instead some people are getting the "it'll be alright" version of my Christmas card. hopefully they will read this and understand. I suppose I could have sent the ones Maddy wrote six years ago concocted some story about it but I just did my best. hey, it's the thought that counts.
next year, I'm getting those Gator cards.

HEY! don't forget tomorrow is the drawing for the giveaway for The Vampire Hunters. don't forget to enter! tell your friends. sunday I will be interviewing Alex Bledsoe author of Blood Groove and The Girls with Games of Blood. there will also be some nifty giveaways with that interview as well!
Posted by Alison at 8:39 PM