my trip to Spooky Empire and geek out moment 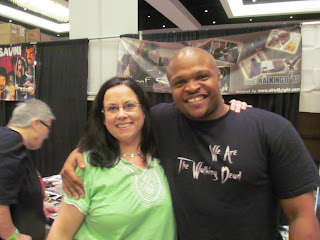 so if you watch The Walking Dead, you know that man next to me is actor IronE Singleton, who plays T Dog on TWD. I'll get back to this pic in a sec. last weekend my boyfriend, author Scott M. Baker, and I went to the Spooky Empire Horror Convention in Orlando. it was awesome. we had the best time checking out all the horror related stuff. as a former costumer I was amazed by some of the con goer's costumes. I was blown away. one of the highlights of the con for me was listening to  author RL Stine talk about writing. he talked about his Goosebumps series and his new book Red Rain. 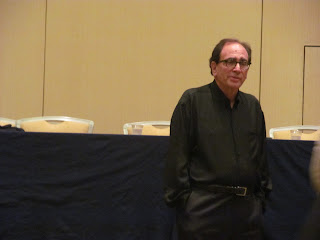 RL Stine is actually very funny. I laughed many many times while he talked. And not one time was inappropriate. after Scott and I got our  books signed by Mr. Stine, we went back to where the celebrity guests were. I wanted a pic with IronE Singleton so we waited in line and when we got up to the table, he signed a photo for me and then noticed Scott. Then he proceeded to Wassup Scott and hug him. He remembered Scott from the Infect Scranton Con where Scott was a panel member and VIP guest. how awesome was that that a TV star remembered my boyfriend and then said "Is this your girl? Oh he talked about you. He really loves you!" I about died. Scott and a TV star were talking about me. and that is why I look so dorky in my pic. I was in a major nerdgasm over MY BOYFRIEND who shot up in awesome. he's already amazing but he got a special coating of super awesome after this.
Check out his book Rotter World from Permuted Press at www.permutedpress.com