Welcome SJ Wright author of The Vampire's Curse! AND giveaways!! 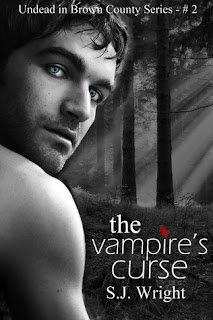 Steph has graciously agreed to giveaway an e copy of The Vampire's Curse. Just comment at the end and leave your info and you're entered. I'll draw a lucky winner Friday. Without further ado though...Welcome back and congratulations on The Vampire’s Curse! It’s amazing!

Was it easier to write the sequel than the first book?

There was a lot more pressure to get the second book done, but it wasn’t necessarily harder.  And I had a lot of fun exploring Michael’s past and bringing him more fully into the series than I had in the first book.

What difficulties did you find in writing it?

Again, it was really just the push to get it done that was difficult.  My husband probably put more pressure on me than my readers did!  As you might know, I have a young son with a disability who takes up a lot of time and energy (he’s totally worth it!)  There were many interruptions during the writing process.  There were times when I lost my focus and got discouraged by a temporary lack of response to The Vampire’s Warden.  But many readers pushed me on, encouraged me to keep going.  I don’t know what I would have done without that support.

Your characters are young, like on the border of young adult. Would you consider writing young adult?

You were able to write and release TVC quickly. How did you find the time to do it?

The only full-time job I have is taking care of the kiddos and the house.  Cameron (the youngest) was in school for several hours a day during the spring, so I had some time to dedicate to the project as long as both the boys were in school.  Of course, that all changed once summer rolled around.  With Cameron, there are a lot of extra things that I need to help him with that most four-year-old boys don’t needs help with.  It’s hard to balance everything.  He’ll be starting kindergarten in just two weeks, so I’ll be able to dedicate a lot of my time to getting The Vampire’s Redemption finished.

You have quite a large fan base. Tell us about them.

I wish I knew more about them!  There are a lot of moms among my readers, lots of teenagers.  I’m just thrilled by the responses I’ve gotten on my blog from the readers.  They’re so great!


How many more Undead in Brown County books do you plan on writing?

I would like to write at least two more books for the series, but if things don’t get wrapped up quite well enough in Book 4, I will write a fifth book.  I love working in Sarah’s world and exploring Michael’s hidden vulnerabilities.

When you finish with this series, will you stick with paranormal or try more mainstream fiction?

If I have a chance, I’d like to write some nonfiction about what’s it’s like to grow up in the way that I did.  There are a lot of kids out there who have been abandoned by one parent or another.  It’s important for them to realize that it’s not their fault.  I want to do what I can to help kids realize that they don’t need to base their own self-esteem on what kind of treatment they get from their parents, especially if their parents were not there for them when they were small children.

When is the next installment due out?

I have set a release date for January 1, 2012.  That will give people enough time to get used to their new ereaders (Thanks, Santa!) before they get back online and start checking out what the coolest new things are to read.

Thanks for stopping by and good luck with The Vampire’s Curse!!

Thank you for having me!  It’s been a pleasure! Born in Indianapolis, Indiana, at a time when children were still not required to use seatbelts in a vehicle, S.J. Wright grew up as the sixth of seven sisters.  She moved around a lot as a child, spent a good deal of her time reading books about horses, roller-skating (in an attempt to find Xanadu), and daydreaming about becoming a novelist.
She now lives in Little Elm, Texas with her husband, two sons, and one Jack Russell terrier that follows her around the house like a shadow.  She is the prime caregiver to her youngest son, who has spina bifida.  She loves horses (and swears one day she’ll actually get the guts to ride one again).
In February of 2011, she released her first paranormal suspense/romance novel called The Vampire’s Warden.  She plans to release a total of four books for the series.  S.J. (Stephanie) also loves hearing from her readers!  Be sure to check out her website at www.sjwrightbooks.com.

But here's the AWESOME part! She is having a super giveaway at her next blog stop tomorrow!!! She will be at Supernatural Bookworm http://angelgonemad.blogspot.com/ and she's giving away... 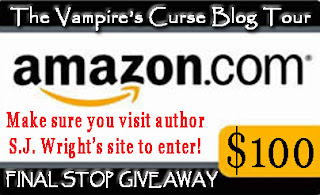 visit for you shot at this EPIC PRIZE!!
Posted by Alison at 12:23 AM