Welcome Bertena Varney, author of Lure of the Vampire! And a GIVEAWAY!

hey everyone! Today I am super excited to have Bertena Varney, MA with us to discuss one of my FAVORITE topics...vampires!

Thank you for having me guest blog today.

What’s your favorite type of vampire?

Hi I am Bertena Varney and I am the author of Lure of the Vampire. It’s a pop culture vampire reference book of lists, websites, essays, and interviews. It is my first book and was an interesting research project.

As, you may know Lure of the Vampire started out as my master’s paper but developed into a pop culture study. The sections that I chose to include in the book were: mythology, history, literature, movies, television, children, website, recreation, education, and lifestyles.

Each section took months to research and during that time I found out what vampires were my favorite vampires to study were. There are the mythological vampires like Lilith as well as the other soulless revenants that each culture seemed to have to explain ideas of disease and death. There is the beautiful Kali from Indian religion.

Historically there is of course Vlad Tepes and his narcissistic cousin Elizabeth Bathory who loved blood baths. They are both just the beginning of the murderers throughout history.

What about literature? Wow is there a multitude of vampire there! Everyone from Dracula and Varney to Eric and Bill of the famous Sookie novels are included here. They range from the romantic to the monstrous and even the ridiculous and fun.

And we can’t even begin to touch all the vampires in films, video games, role playing games, television, and children’s books and even in real life.

Many of my friends with whom I shared the list were just amazed at that there were that many varieties of vampires to study.

So, think about the thousands of vampires that you have come across in your life- the ones you’ve read about? Role played as? Watched on television? Or even met in real life?

Well, I did and that is how I came up with Lure of the Vampire. It is a reference book with websites, lists and essays that provide the reader with information on each of their favorite or even their most hated vampire. It provides the reader with information that may be used for their new book, their school papers, or even just because they want to know more about the vampire.

I know that nonfiction books are not the typical books that are on blog tours and I greatly appreciate you allowing me to host here.

So, readers please tell me below who are your favorite vampires and why? 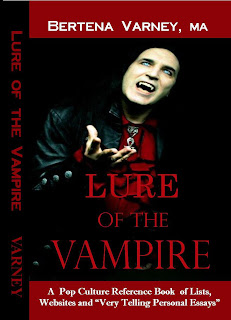 Lure of the Vampire is a pop culture reference book that begins with history and mythology and ends with modern living vampires. The author has provided "fun" lists like the Powers of Dracula, Real Live Vampire Murders, Television Shows and African Americans who have Played Vampires. There are also websites in each section that show the most popular vampire books and even children's shows and books. But, there is a personal twist when it comes to Lure of the Vampire. The author has provided personal essays from national and international vampire authors as well as her own. They range from a personal look at vampires in mythology to the romantic lust filled vampire. There are also interviews with various groups and individuals involved in the vampire community. Lure of the Vampire: A Pop Culture Refence Book of Lists, Websites, and "Very Telling" Personal Essays is a perfect quick to grab reference book for the vampire fan or author. It is concise enough to assist you in finding links to what you are looking for without our being too cumbersome and confusing.
Lure of the Vampire contains essays from authors: Denise Verrico - David MacDowell Blue - Charles E. Butler - C.J. Ellisson – BittenTwice – Elizabeth Loraine

Lure of the Vampire is great for any writer who would like to find fun facts to give their vampires in their story. For example, what powers have vampires in mythology possessed or the first literary vampires? There’s a section for that.

What if you are a vampire fan who is looking for new YA or adult authors-  there is a section with titles, authors and their websites.
What about vampire games? There’s a section for that too.
Sections include: Mythology, History, Literature, Movies, Television, Recreation, Children’s Vampires, On the Web, Education, and Real Life Vampires. There are lists, websites, essays, and interviews included in throughout the book.

Lure of the Vampire: A Pop Culture Reference Book of Lists, Websites, and "Very Telling" Personal Essays is a perfect quick to grab reference book for the vampire fan or author. It's concise enough to assist you in finding links to what you are looking for without our being too cumbersome and confusing.

You can buy Lure of the Vampire at Amazon.com in print here-http://amzn.to/nwifDw
Ebooks will be coming to Kindle, Nook and Smashwords soon.

Ms. Varney has graciously agreed to give away an e copy of her brilliant book here. Just leave a comment below and I will randomly select one this Saturday. EASY!
Posted by Alison at 12:03 AM