Excerpt from The Vampire's Warden by S.J. Wright!!LOOKEEE!!! 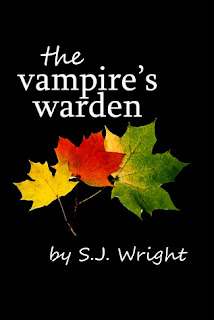 Today I'm excited and pleased to be a part of the book blog tour for S.J. Wright. She has written a terrific vampire novel with a fresh twist to it. I highly recommend it to lovers of vampire fiction.
In this, we get a brief glimpse into the power of the attraction that these two feel for each other.  Sarah needs to be firm with Michael, but it’s much harder than she imagined it might be.  It’s a constant struggle within her.  She’s found it hard to trust men since her one bad relationship ended, but she still feels completely drawn to Michael.
I crossed my arms and shivered as I felt the cool night air begin to seep through my jacket.  I knew it was ridiculous for me to be out there, trying to get honest answers from someone who probably had centuries to perfect his lies.
“Cold?”  He had moved closer, his dark silhouette looming before me like an animal about to strike.  His brilliantly-colored eyes narrowed and he held out his powerful arms.
“I could warm you up, Sarah.”
The power his voice had over me was still strong.  I noted again how far out I was from the boulders and took an additional couple steps back just to be sure.
He shot me a mischievous little smirk, “Ah, yes.  The boundary.”
He moved forward yet again, this time more slowly and gracefully than seemed possible, until he was only a foot from me.  I was holding my breath but my heart was thumping like a wild drum, seeming to drown out all my other senses.  Had the diagram in the journal been wrong?  How else could he keep getting so close?  Panic had begun burning me from the inside out, and my hands were trembling.
His rumbling laugh came rolling over me in delicious waves, “You need to relax, my dear.  Given the faith you have in that mad man’s journal, I would think you would understand that I am forbidden to cause you any harm.”
“That depends on what kind of harm you’re referring to.”  I said weakly.

Here's a bit about the author... 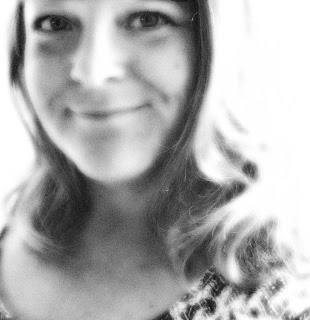 I am a stay-at-home Mom with two growing boys, an overworked husband and a very devoted Jack Russell terrier named Shelby.  I grew up in small city called Mishawaka, Indiana and the majority of my family live in the Indianapolis area.  I now live with my wonderful boys, my husband and sort-of-annoying dog in Little Elm, Texas.  The Vampire's Warden is the first book I have ever put up for sale.
You can buy The Vampire's Warden on Amazon http://amzn.com/B004NNVKAO.  And at BN.com http://search.barnesandnoble.com/The-Vampires-Warden/SJ-Wright/e/2940012222695/?itm=1&USRI=the+vampire%27s+warden

Thanks to the author, Ms. Wright and The Bookish Snob.

She's appearing next at Supernatural Bookworm http://angelgonemad.blogspot.com/
AND she's having a NIFTY GIVEAWAY!!! 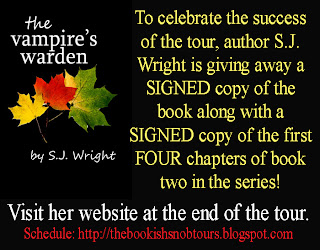