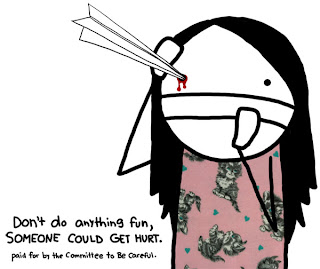 yeah that is my mood. the only good thing about my mood is that it is really good for writing the intense parts of my WIP, which is now titled...DEATH HUNTER. it makes sense, believe me. the title, not my mood. anyway, I'm now in day two of my craptastic mood. there are several things contributing to it but I'm persevering. I kind of have to as that is my baseline. like I said this is really good for writing. I've written about 16k words in Death Hunter and FUNdraiser is now at 11k words.
I think my mood is a culmination of factors from the month of april. now april is going down in my list of crapbag months. previously it was just june and november but I think now april has earned a place there. hopefully as time passes and I process what happened a little more I will shake my mood. BUT I plan to make good use of it by continuing to write through it. it's kind of like playing through the pain in sports. that's a terrible thing to do by the way but I think if I write through what is bothering me I will get a two fold benefit of more words and a better frame of mind. that would be like one of those machines that makes it's own energy and keeps working infinitely. two things working for each other's benefit. I don't even know if that makes sense but in my head it does. you know what I mean. symbiotic. I think that's the word. snap. I need a nap and a cup of something really awesome.
speaking of awesome... don't forget to visit this week on FRIDAY THE 13th!!!(ominous music playing) when S.J Wright stops by and shares an expert of her terrific book THE VAMPIRE'S WARDEN.
Posted by Alison at 3:35 PM