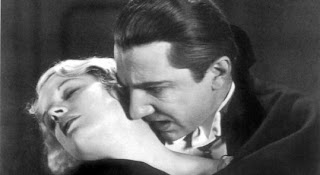 so today I watched the original (and in my opinion the best one) version of Dracula with my main vamp dude Bela Lugosi. the version I watched had a new score written by Phillip Glass and performed by the Kronos Quartet. I was in heaven. so then I decided to watch all my Draculas. I was a one woman Dracula appreciation society. maybe I should have shirts made. I watched the Frank Langella version(LOVE his voice), a Christopher Lee version (again the voice) the Francis Ford Coppola version, the Gerard Butler version and am now watching sort of a version, Nosferatu directed by F.W. Murnau. after this one, I'll watch Shadow of the Vampire, a movie about making Nosferatu with John Malkovich and Willem Dafoe. very awesome.
I wish I could watch the Dracula TV series that was on in the late eighties early nineties. that was campy but awesome. it had a very young Mia Kirschner in it. Google the series. if anything it's worth the campy laugh.
Posted by Alison at 7:57 PM