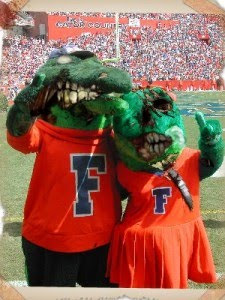 yes it's zombie Albert and Alberta. even as zombies they are still awesome. zombie gators have nothing to do with my post today. well, I guess because they are Gators they do. but again, zombies freak me out big time and whenever I read zombie or post apocalyptic stuff, I get all freaked out and paranoid. love to all my author friends who write that. for some reason those things are my achilles heel. if ever I was captured for secrets(haha that's fantasy) all they would have to do would be stick me in front of a tv or an e reader filled with zombie and post apocalyptic stories and I'd crack.
but I digress, yesterday was the first day of college football season and my beloved Gators played. I tried to use the experience to help fuel my WIP FUNdraiser. I had some luck but not as much as I had hoped for. probably because there were no fans. not fans as in fanatics. they were everywhere. the fans I am on a rant about are the nifty hand fans that they used to hand out before the first 3 or 4 games of the season. they were not only awesome (they looked like this but with a stick handle)

but they kept you somewhat cooler. not much because it's so hot that you measure the temperature in degrees Kelvin. that's a lot. one day I'll tell you about my chemistry readiness score. come to find out that they decided to stop handing out the fans as they had done for probably 40(no exaggeration) years because last season a dumb ass slapped another fan(the human variety. I know it's getting confusing) with one and then there was a fight and then charges were filed. blah blah blah. now, I can't believe that this is the first time that this has happened. maybe the charges being filed part but not the use as weaponry part. but I guess in this day and time of no one being responsible and the overlords having to watch out for us all, hand fans were determined to be too dangerous or at least too tempting for spectators to manipulate responsibly. so now 90 plus fans must sit fanless in the murderous heat to cheer on the Gators. the fans under the boxes won't suffer because the people in the boxes open their windows and waves of arctic air flow down on them but the rest of us will. all because someone screwed it up for the rest of us.
end rant now.
Posted by Alison at 1:04 PM