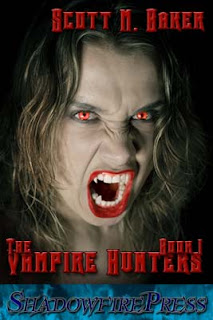 Lately I've been reading a ton of books that involve vampire hunters. I find this funny and ironic because I write about vampires as attractive protagonists. So I thought I could review a few of these books. Today's novel is The Vampire Hunters Book I by Scott M. Baker.

Modern day vampire hunters wage a brutal battle against the undead in the nation's capital.
As former Boston cops, Drake Matthews and Alison Monroe thought they had experienced it all... until they found themselves tracking down a serial killer who turned out to be one of the undead. Stopping him cost them their careers and almost their lives.
Thanks to an influential and anonymous benefactor, Drake and Alison find a new job ridding the streets of Washington D.C. of the vampiric threat terrorizing the nation's capital.
Only this time, Drake and Alison are not facing a single vampire but an entire nest led by Ion Zielenska, one of history's most evil and twisted masters. As the vampires indiscriminately prey on humans, seeing them as nothing more than food to satiate their hunger, they create a wave of violence that threatens to engulf the city.
Orchestrating the carnage is Antoinette Varela, the mistress of the nest, whose vendetta against the hunters is personal.

I truly enjoyed this book. I thought I wouldn't be as taken with it as I was because it mainly focuses on the hunters but I was. Each of the hunter characters was well constructed and 3 dimensional and I found myself drawn into each of their personal stories. Especially protagonist Drake Mathews and Alison Monroe. I cared about them and felt like I knew them.  The vampires, who the author portrays as evil, ugly creatures, were still fascinating. They were even more attractive because this type of portrayal is not very common in novels right now.They are more in tune with what world folklore states they are. Baker skillfully weaves historical facts and information into an intriguing version of the battle against vampires and their quest to dominate humanity.
The narrative of the novel was well paced. While detailed, I never felt bogged down. The author also builds a setting so vivid that I felt like I was there. Especially the final scene, which I won't give away.
Like I said before I enjoyed this book and highly recommend it. I can't wait to read the sequel, which according to the publisher's website, comes out on August 20th. I understand that there is going be a third in this series but I'm unsure of the release date.
You can find The Vampire Hunters Book I by Scott M. Baker  on shadowfirepress.com

disclaimer type stuff- this was an unsolicited review. I bought the book on my own to review it.
Posted by Alison at 8:15 PM