they call me the head hopper 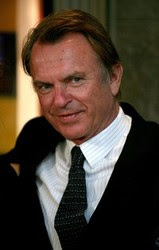 yeah okay that has nothing to do with the pic of delish Sam Neill but hey, there you go. I go by many names. some printable and some not but apparently a name I could go by is the head hopper. I love to head hop in my writing and that's bad. or at least to the publishing world. I myself like to know what everyone is thinking so it's not.lol. part of my revising was eliminating all of the stinking head hopping I did. I said goodbye to almost 2 thousand words. that's bad. this might explain some of my rejections on partials and fulls. man, I wish I could back up time and start again.
I wish head hopping wasn't so bad. not because it would have saved me countless hours or whatever but because like I said before, I love to know what people are thinking for good or for bad. maybe in an alternate universe it won't be so bad but until Dr Kaku builds his worm hole space ship to that alternate universe, I'm stuck with the rules. (love you rules!) hey and also that space ship can take me to Sam Neill and Alan Rickman!
Posted by Alison at 9:46 PM