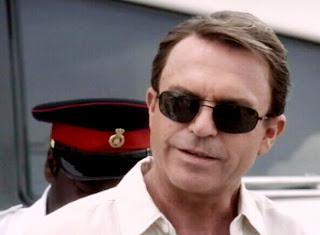 yeah so I finished my fight scene. it was short and sweet. I focused mainly on my mc and another vampire and their fight against the hunter. in the periphery I wrote about the other fighting but it was mainly Sidney and Marta. I'm quite pleased with it but it's in the hands of super editor so I'll soon see.
as for the pic and the title of this entry...in my on going time wasting I found this. Yummy Sam Neill in sunglasses. or who I picture Sidney as wearing  sunglasses. it's always nice to imagine things that your characters do. I found one picture of Sam Neill swimming but I don't think Sidney swims. he could but I don't think he would. nevertheless, I saved that pic for a rainy day when I need I candy.
Posted by Alison at 11:22 PM