and a great time was had by all 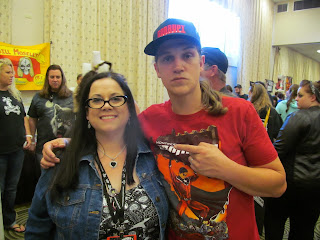 so Scott and I were featured authors at Spooky Empire, a Horror Con held in Orlando each October. it was a great time to meet fans and celebs like Jason "Jay" Mewes (of Silent Bob and Jay fame...Snoogins!). it was also super to sit on panels about writing and talk about writing to other authors and people trying to get published. I was among some fantastic authors like Alicia Sams, Jonathan Maberry and Mitch Hyman, all who write either horror or paranormal fiction. Scott and I love talking to writers who are just getting started or are bestsellers like Maberry. it's incredible to reach out to help frustrated writers who are still in the unpubbed stage. I especially like to do this because even though my second book has been published, I still consider myself a new author and remember the frustration of rejections and the whole deal of creating the most awesome query letter in the universe so it will catch an editor or agent's eye. anyway, we had a great time at Spooky and will definitely be back to do Spooky Mayhem in May and Empire next October to see the friends we made and hopefully make more!