Prague, Heydrich and me 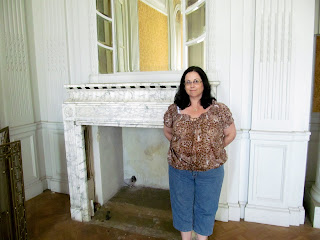 so here I am in front of one of the fireplaces in the now abandoned villa of Reinhard Heydrich when he was the Reichsprotektor of Bohemia and Moravia. this stop was just one of the many astounding and emotional places we visited on the tour I took of the sites associated with the assassination of Heydrich in July and August. it was a big deal to be allowed into this house as it is now in private hands on the site of some sort of industrial complex. one doesn't simply waltz into industrial areas in the Czech republic, even now that communism is over.
anyway, I've been wanting to write about my trip over there because the tour for me had many purposes. one, it fed the hungry history nerd in me. I got to see places that the average person doesn't see. and I saw places that I only had seen in books. especially the books I had been reading in my research for my second and third installations in my series The Primigenio Tales. the main purpose the tour served was to help me to come to terms with writing about such an evil person who was real. I have been driving myself nuts with guilt and other mixed emotions while writing him as a main character. I've had to create a vampire version of a reviled person from history but also someone who was known as "papa" to his children. oddly enough I felt a great deal of worry about how his descendants would feel about me choosing to use him as a fictional character. would they think I was just using him to make a buck? and would people vilify me for taking someone who was so notorious and making him into a complex and sometimes even likable character? all that remains to be seen but seeing the places he lived and touching things he was part of helped me come to terms with him and his place in my books' universe. also seeing the horrific things he was part of helped remind me of what he dedicated his life to. 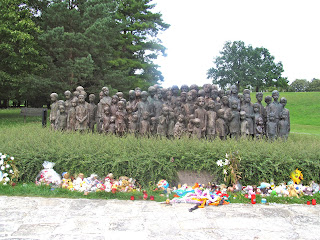 anyway, my trip to Prague was epic and I will never forget it. I hate to post such a downer of a post but I had been meaning to do this. I'll be back with my usual goofiness this week.