Welcome Jennifer Turner author of Eternal Hearts plus, a GIVEAWAY! 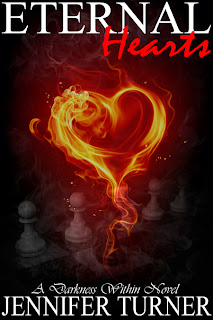 Thanks for joining us here, Jennifer. Congrats on Eternal Hearts!

Thank you! And thanks so much for having me, Alison. :)

Your world building is awesome. You really put the reader in the story. Do you do a lot of research first or do you write from experience?

I think I tend to write more from experience than anything, unless I’m dealing with a character trait that I don’t have any personal experience with. For instance, Logan, the heroine of Eternal Seduction (book 1), was a homeless drug addict. I have a little bit of experience with being homeless, but I don’t have any when it comes to heroin addiction. So I definitely had to do some research to portray Logan’s addiction right. When it comes to anything else, like historical facts/dates or whatnot, I do a little research here and there – but I’ve given my supernatural world a somewhat alternate history so I don’t have to be too strict with the facts. :)

I love your vampires. They’re varied and flawed like humans. Is that how you think vamps and other paranormals should be?

Absolutely. To be honest, I can’t see them being any other way. I think when you take a character that was once human, or is only part human, there’s really only two directions for them to go. They’re either going to cling to their humanity with everything they have, or they’re going to cast it aside completely. And that one choice can draw out so many strengths and flaws in a single character, as well as recolor their entire personality. Not to mention, much like humans, rarely are one vampire’s experiences the same as the next, so it only makes sense to me that they’re as different and varied as we are.

What about vampires draws you to them?
When it comes to vampires, it’s definitely the immortality concept that draws me to them. I think the idea of someone living for hundreds of years, if not longer, is rather intriguing. I mean, when you think about all the events your parents and grandparents have witnessed over the course of their lives, all the choices they’ve made and how each one probably shaped their character somehow, it’s pretty remarkable. Now consider what living for 10,000+ years would most likely do to someone. The complexities of their personality, the ancient ideals and history they still ascribe to, clashing with the speed and beliefs of the modern world…for me it’s just fascinating to think about. Trying to bring that conflict out in my Ancient vampires, who all deal with it in a very different way, is easily what keeps me writing at the end of the day. ;)
Will you write more vampire fiction?

I sure hope to. :) I’ve planned roughly 15 books for the Darkness Within series, and they all feature at least one vampire as a lead character.

What do you plan on writing next?

Right now I’m working on final revisions of Eternal Embrace (book 3), as well as a novella trilogy entitled Ascension. I’m also working on a paranormal thriller trilogy with my husband, but it’s still in the planning stages – so it might be a while before it ever sees the light of day! ;)

Is there something you’d like to write? Something outside what you usually write?

I’d love to write an all out horror novel someday. You know, the kind of story that’s so dark and creepy, even if you’re 30 years old you still check the closet and under the bed before you turn the lights out. ;)

Describe your writing routine. Do you have a special room or chair? Do you listen to certain music?

As far as I can tell, I don’t really have a writing routine. I do have an office with a great chair, but I’m just as likely to write at the dining room table as I am in my office. All I really need is my laptop and some good music. I’ve tried before, but I just can’t write without music playing. And it doesn’t have to be anything special…just a song/band I like with a good rhythm. :)

What advice can you give to writers trying to get published?

No matter which direction you decide to go, whether you try for traditional publishing or go with self-publishing - do your research. If you’re going the traditional route, research the agents who handle your genre, research the right way to query the agents you’ve selected, and then research what to expect from the agent/author relationship as a whole. If you’re going the self-publishing route, research what true self-publishing is versus vanity publishing, research the growing list distribution options and author services available to you, and perhaps above all else - research every single professional (cover designer, editor, etc.) you consider working with…because they’re not all created equal. ;) I just can’t stress enough how important it is for you to know and understand the publishing industry before you even think about dipping your toes in!

Toni Tutoro just wants to go home. Banned from Chicago’s vampiric society after cutting a swath of violence through the city, she must now successfully complete an investigation for the Lord of Chicago to regain the right to live in her hometown again.

To ensure Toni’s safety during her probationary period, Drake Black, a feared assassin, is secretly contracted to protect her. Even with direct orders to keep his relationship professional, and his own personal vow to never get involved with a female vampire again, Drake finds himself drawn to Toni in ways he can’t explain. But unbeknownst to him, he’s tied to one of the people who drove Toni to her night of destruction.

Drake’s legendary heritage holds the key to Toni’s survival and success, but will she be able to forgive his connection to the brutal night that robbed her of those she loved most? Will Drake be able to forget the betrayals in his past and risk taking one more chance? But most of all, can they find a way to reach each other in the darkness?

Jennifer Turner lives in Bowling Green, Ohio, with her husband, twelve year old daughter and two cats. She regularly claims one of the aforementioned takes far more work than the others to maintain – but she won’t share which one. She’s the middle child between two brothers, and the favorite child of her parents. Of course, that’s always subject to opinion. Jennifer began her writing career as a self-published romance author, but is now represented by Robert Gottlieb, Chairman of Trident Media Group.
www.darknesswithinnovels.com  her website!
www.twitter.com/darknesswithin
www.facebook.com/DarknessWithinJen
www.facebook.com/AuthorJenniferTurner
www.jen-turner.blogspot.com
Jennifer has agreed to give away a copy of her awesome book Eternal Hearts! Just leave a comment with your email and I'll pick a winner on June 18th.
Posted by Alison at 12:57 AM