Welcome Ami Blackwelder author of The Day the Flowers Died 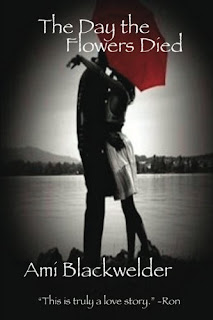 I know the preface talks about why you wrote the story but did you have any previous interest in the period? Certainly. My family and I have watched many movies, documentaries in that time period. Just yesterday on PBS they showed lost footage filmed by a German for propaganda covering the Warsaw area. It really was astonishing and so sad. War time is always a very sensitive and volatile period to write in...I am also interested in Medieval period.

It’s a very dark period of history. Did your research leave any lasting impressions with you? I had never seen raw footage of Hitler in Munich before researching this and that stayed with me. The way everyone revered him like a God was freaky. I saw footage of President Hindenburg voting in black and white. I heard beautiful music from that time and all of it will stay with me. Reading accounts of survivors and some of their stories also left lasting impressions. The scene here Rebecca is in the hospital and the wounded Jewish won’t be helped is based on one such account.

The main characters are very realistically drawn. What methods do you use for character construction? They formed in my dream first and I think from that they left a very real impression which I tried to stay true to. I can’t say I use this method regularly, because its never happened to me before except for this book. But to stay authentic to the time period I had to go through many drafts of rewriting, educating myself on the behaviors of that time and language used.

How hard was stepping away from what you usually write to write The Day the Flowers Died? Well, that was the third novel I ever wrote and honestly history/culture is a big part of who I am too. I intend to write more historical and cultural pieces later. Glass Tears will be out in 2012 and that is a story based in Tibet -occupied by Red China. I do write more paranormal/science fiction/fantasy than History/Cultural, but all of that is a big part of me. So, to answer the question shortly- it felt natural.

Tell us about your writing process. I begin with a seed of an idea, a storyline. than character are born who usually drive the plot lines further than I could have on my own, often changing or adding to the original story/plot. I outline as i go. I have a place I know I will begin and end with, but the middle is outlined as the characters become alive. What do you have next for readers? I am writing The Mers (A Mermaid twist) and She Speaks to Angels (An angel twist) and then Don’t Speak (a medium twist). Then I will write the last book in the shifter Evolutions, and Elfin saga and release Glass Tears as well.So I have my hands full for the next year!

Any advice for struggling writers? DO more, talk less:) BELIEVE in yourself against all odds! Ignore the critics, they are the ones who never DO!

Thanks Ami! Good luck with your tour of BOTH books! 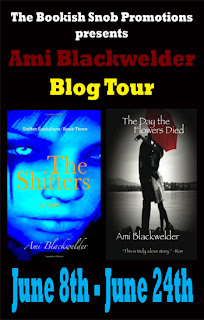 Next stop is at The Wormhole http://wormyhole.blogspot.com on June 23rd. 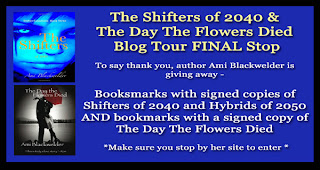 At the end of the tour...there's going to be a GIVEAWAY!! Ami's site is http://amiblackwelder.blogspot.com

Ami Blackwelder is a forbidden romance writer in the paranormal and historical romance genre. Growing up in Florida, she went to UCf and in 1997 received her BA in English and teaching credentials. She travelled overseas to teach in Thailand, Nepal, Tibet, China and Korea. Thailand is considered her second home now. She has always loved writing and wrote poems and short stores since childhood; however, her novels began when she was in Thailand.
Having won the Best Fiction Award from the University of Central Florida (Yes, The Blair Witch Project University;), her fiction From Joy We Come, Unto Joy We Return was published in the on campus literary magazine: Cypress Dome and remains to this day in University libraries around the country. Later, she achieved the Semi-Finals in a Laurel Hemingway contest and published a few poems in the Thailand’s Expat magazine, and an article in the Thailand’s People newspaper. Additionally, she has published poetry in the Korea’s AIM magazine, the American Poetic Monthly magazine and Twisted Dreams Magazine.
Posted by Alison at 12:12 AM