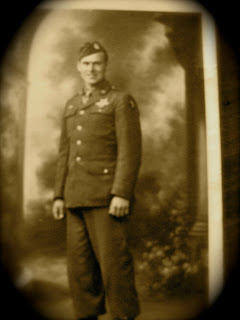 today is June 6th. Sixty seven years ago, Operation Neptune aka as D-Day happened. the handsome gent in the pic above is my grandaddy Marshall Beightol who jumped on that day.he was one of the 101st Airborne who got dropped off course and fought for their lives through a series of harrowing battles including the Battle of the Bulge Out of the 12k airborne that were dropped, only a third of them synched up with their correct units and most wandered around the French countryside like kick ass vigilantes for days until they could reform. I can't imagine the courage and commitment those guys had. Grandaddy ended up fighting all the way to Italy (man, that's a long way) and somewhere we have a picture of him and a buddy in front of the guard house at the Berghof or Hitler and his Gang's house, as grandaddy called it. I would post the pic but it's packed because we're in the process of moving again.(I know) I have a great uncle who was wounded at D Day on Omaha beach. I don't know much of his war history other than that.
anyway, take a moment today to think of the over 160k soldiers who took part in this massive operation that led to the eventual defeat of the Axis.
Posted by Alison at 6:55 AM