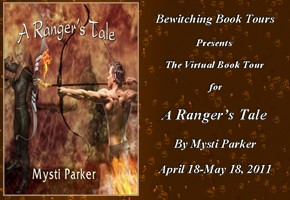 I'm super excited to have author Mysti Parker with me today. She is promoting her new fantasy novel A Ranger's Tale.
1.Tell us a bit about yourself.
Thank you so much for having me here today. I’m a full time wife, mom of three, and a writer. Somewhere in my old life, I got a biology degree and worked in some laboratories. Perhaps the blood and guts prepared me for the messes of motherhood, but being a mom is the best and hardest job I’ve ever had.
What else is there to tell? My husband and I are high school sweethearts, we’ve been married for almost fourteen years, and we’ve always called Kentucky home.  Besides our three kids, we’ve got a lazy housecat and a smart outdoor dog. When I’m not writing, I love to read and critique, play with the kids, and watch TV when the kids are asleep.
2.What inspires you to write?
Just about everything! I get ideas for short stories from prompts or from real-life experiences. I wrote short about a Valentine’s Day dinner gone awry based on our own Valentine’s Day date. Another story set in a nursing home was based on my stepdad’s illness and his stay in a nursing facility.
For my fantasy series, I’m inspired by the Lord of the Rings trilogy, roleplaying games, romance, and the desire to write about fantastical characters with realistic problems. Even though my elves may live for centuries, they face problems that most of us can relate to, as well as the occasional rogue wizard, goblin, or troll.
3.Tell us about A Ranger’s Tale.
A Ranger’s Tale is set in the fantasy world of Tallenmere. It’s the first in a stand-alone series. The century-year old high elf, Caliphany Aranea, is expected to become a mage and head up the Mage Academy in Leogard like her father, Sirius. He wanted his firstborn son, Caelen, to take his place, but after Caelen died serving as a paladin for King Leopold, the responsibility fell to Caliphany. The problem is, she doesn’t want it and doubts her abilities. Sirius keeps her on a short leash, won’t let her leave the city, and expects her to marry a mage she doesn’t even like.
One day, while strolling on the docks of Leogard Harbor, fantasizing about far-away places, two scoundrels attempt to kidnap her. That’s when half-elf ranger and ship captain Galadin Trudeaux comes to her rescue. After that fateful encounter, Caliphany convinces Galadin to train her in the ways of a ranger so she can set out on her own and fend for herself. From that moment on, their lives are forever intertwined, and you’ll have to read the book to find out more!
I had a blast writing A Ranger’s Tale! There’s a little bit of me in Cali, I think. She’s spunky, independent, and well…impulsive. She makes up for it with her loyalty and devotion to those she loves. Galadin provides a good balance in her life, keeps her grounded, and loves her to no end. He’s the kind of guy most of us ladies dream of, but sometimes guilt from his past gets in the way.
4.Do you write other genres besides fantasy?
So far, my novels are fantasy romance, though I do have one historical romance on the back burner until I have adequate research time. In short stories, I’ve tried everything from speculative, to horror and comedy. I love stretching my writing muscles to try new things.
I have a goal to keep submitting more short stories to publications and contests. I’m still working on meeting that goal. Most of them sit on my hard drive, only to be seen by my critique partners.
5.What’s up next for you?
I’m working on the second novel in my Tallenmere series, called Serenya’s Song. It features Jayden Ravenwing, a prominent character from A Ranger’s Tale. It takes place in the small town of Summerwind, where a strange portal has opened, threatening the lives of everyone who lives there. Jayden must find a way to close it before it’s too late.
That’s all I’ll say for now, but look for it from Melange Books in October, 2011.
6.Any advice for writers out there struggling with their publishing journey?
Get a good critique group—either in person or online. Cultivate relationships with other writers who write in your genre or style. Critique often, and it will vastly improve your own skills.
Read a lot in your genre and beyond as well. Read both the good and bad—you’ll learn what to do and what not to do.
Learn to edit your own work. Don’t depend on your editor to do that. Read your stories out loud to hear things your eye misses.
And most of all, don’t give up! Writing is hard work, but like anything else, the more you practice, the better you’ll get.
Here's the blurb from the back of A Ranger's Tale
Set in the fantasy world of Tallenmere, the high elf Caliphany Aranea longs to explore the world and escape from her controlling father. Her dreams are fulfilled when she meets ranger and ship captain Galadin Trudeaux. But, when secrets from the past bring tragedy to those she loves, Caliphany must fight to hold on to the life she's always wanted.
Here's where you can find A Ranger's Tale http://www.melange-books.com/authors/mystiparker/parkerarangerstale.html
And here too http://www.allromanceebooks.com/product-aranger039stale-511665-143.html
Here's where you can find Mysti http://www.mystiparker.blogspot.com   and  http://www.melange-books.com/authors/mystiparker/mystiparker.htm
Thanks Mysti for being here and thanks Bewitching Book Tours!
Posted by Alison at 8:00 AM