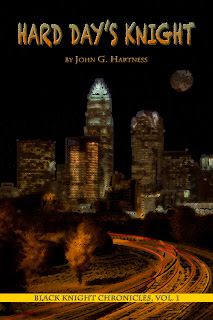 Thanks for stopping by today John! A Hard Day's Knight is terrific! Let's get down to chatting.

Why vampires? I read a lot of vampire books, and love them, so I decided to write my own, with my own weird twist.

So you're a theatre techie too? Does that influence your writing? I find that my work in theatre has helped my dialogue a lot. You can’t spend twenty years working on Mamet and Shakespeare and not have your ear for dialogue improved. I don’t really put much of my technical expertise into the books, because most of it is too esoteric, but there are a few things in the sequel to Hard Day’s Knight that are performance-based. One of the characters is a dancer, so I throw in a few terms here and there.
Hardest thing about developing a story idea? I find the twist to be one of the toughest things. You know, the bit in the middle of the book where you think everything’s going one way and suddenly it’s going off in a different direction entirely. Keeping those fresh is a challenge for me.
Who are your writing heroes? Have you ever met any of them? Neil Gaiman, Jim Butcher, Pat Conroy, John Irving, David Eddings, Chris Claremont, Kim Harrison to name just a few. The only one of those I’ve met was Neil Gaiman at a signing a lot of years ago. He was still doing mostly comics at the time, I think Neverwhere may have just come out, and I met him at a comic con. He was very pleasant, but I was one of thousands so I’m sure he doesn’t remember me. Especially since I can’t even remember which con it was!
What is next for you? The second book in the series came out in January, and I’m working on the third book. I hope to have it out by mid-summer.
I love the characters in A Hard Day's Knight! Are they people you

know? They seem like it! They are all drawn from people I know, but they’re an amalgam of traits from all different people. Jimmy is part me and part dozens of other people. Greg is part me and part dozens of other people. Sabrina is completely fictional, but I did steal her name from two friends of mine.
I was working on a production of Annie and I was writing in the lobby between rehearsals. I needed a name for the detective character and our stage manager, walked by. I thought to myself, “Sabrina! I’ll steal her name!” Then the executive director of the theatre walked by, and I stole his last name for the character. So that’s how she became Sabrina Law.

This book is action packed and you never know what's going to happen
next. Was it hard to keep the momentum going or was it like the story,
crap just kept happening? Remember where I was talking about “the twist?” It was a lot of work to keep the momentum going. Any time I felt like letting my foot off the gas, I fought the urge and kept my hammer down.
Tell us something about you that's fun or geeky! I’m a huge comic nerd. I have a Superman ring that I frequently wear, and my standard con garb is a comic book t-shirt (usually something from the Sandman realm) with a dress shirt unbuttoned over it. I actually used to work in a comic shop as a second job for a while running the Magic: The Gathering tournaments. So my geek street cred is pretty solid.

Thanks for being here today John! Your book is awesome! I wish you the best!


Here is some more about John 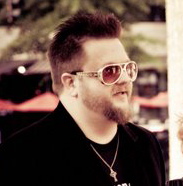 
His first novel, The Chosen, is an urban fantasy about saving the world, snotty archangels, gambling,  tattooed street preachers, immortals with family issues, bar brawls and the consequences of our decisions.


He followed up The Chosen with A Hard Day's Knight, a new twist on the vampire detective novel and the first of a planned series of at least five books. The second book of The Black Knight Chronicles, Back in Black landed in March of 2011 and has enjoyed immediate success.


John has been called "the Kevin Smith of Charlotte" and fans of Joss Whedon and Jim Butcher should enjoy his snarky slant on the fantasy genre. His next novel, Knight Moves The Black Knight Chronicles vol 3 is due out in summer of 2011.


He can be found at www.JohnHartness.com and spends too much time on Twitter, especially after a few drinks. 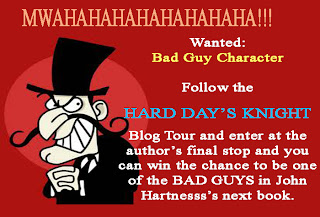 next stop is Jagged Edge at www.klearsreviews.blogspot.com
and definitely pick up John's book!! it's awesome!
Posted by Alison at 12:00 AM