so what's up with Putin? 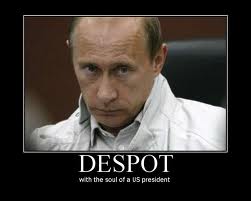 a bunch of people have asked me what the deal is with ol' VP. honestly, I don't know. probably part of it is his name is Vladimir. anyone named Vladimir is gonna get my attention. also, when I was a theatre student, I did a Scenic Design project called Mr. Putin's Neighborhood. it was all very creepy and evil and steampunky. LOVED IT. doing the research for the project, I had to research the guy and just found him interesting in a despoty and sinister way. consider that he probably killed people for the KGB back in the day but still loves to cuddle with a puppy. that's character dichotomy. I WISH I could write a character like him.
God, I hope he doesn't have some sort of tracking device so he knows all the people who say stuff about him. what am I talking about? I know he probably has Google Alerts so I'm so very screwed when he takes over the world. maybe I'll retitle my saturday posts to  Happy Vladurday, he's the uber emperor of the universe. hmm.
Posted by Alison at 2:16 PM