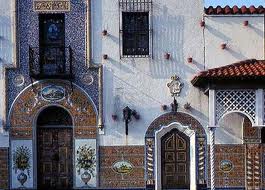 I always love the research part of novels. even though I grew up in Tampa, I haven't been there in quite awhile so I had to do some research. it was awesome and it made me appreciate the history of Tampa and Ybor City that I basically blew off when I was younger. I had to relearn all of the cool areas and bars. when I lived in Tampa three thousand years ago, I loved Ybor because of the awesome new wave/punk music and vintage clothing stores. I can remember one of the stores, La France. it was like Mecca for a wannabe new waver like me. so cool. as a teen in the 80s I never had money for cool stuff from there but it was fun to take a day off from school and go explore. yeah, I took a lot of days off. I got good grade though. I had AP classes and did just fine thank you, even with my days off. but doing all my research, I saw how much things had changed, some for the better and how much things had grown. wow. I only live like 2 hours from Tampa and I keep telling myself I'm going back and reacquaint myself with the area. I'm drawn to it now. It has a homey feeling that it didn't have before. I want to go back for the Gasparilla Invasion which is like a big pirate fest in february named for a real pirate named Jose Gaspar but I don't think I'll make it. next year, definitely!
Posted by Alison at 4:44 PM