the pain of moving 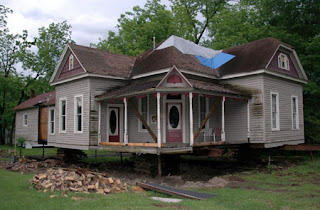 I have always wanted to find an old historic house and move it onto a bunch of acres. for some reason I have a fascination/ obsession with house moving. maybe I did it in a past life but anytime I see a poor old neglected house I immediately think "Man, I could buy that and move it." just like this house. but the moving I'm talking about today isn't house moving (I wish). it's chapter moving. I hate doing this and I often think moving houses is easier. I've been trying to rewrite a new first chapter because while my current first chapter is pretty awesome, it's not really in the right place. it should be the second or third chapter. so I've been killing myself trying to find a new hook/ catchy opening that is more appropriate. ha. finally today I had an idea and tried to crank it out. I think it will work or at least I'm hoping it will. it better because I can't think of another way to open the novel lol.
I still think house moving is easier. and more fun too!
Posted by Alison at 5:31 PM