Timmy would know!!!Timmy is MADE OF AWESOME! 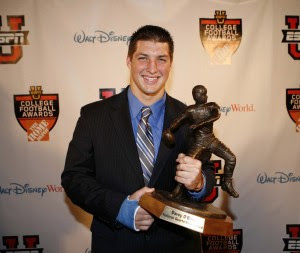 I just had to post this because well, you know how I feel about Tim Tebow. Look at him. I just LOOOOOOVE him. he is on the cover of Madden '11 NCAA and I'm buying it. of course that means I'll have to buy a ps3 too but that's okay.
anyway, this is the easiest decision I've made today. right now I'm wrestling with some serious decisions re: LIM. I'm leaning toward giving up on it. it might be temporary but it might not. I think I've written a book that doesn't really fit anywhere. it's good but not  easily categorized. if I do, it will be disheartening but not the end of the world. I'm kind of used to events like that so I'll be able to deal. FUNdraiser will probably be an easier sale anyway. I've gotten some super advice but this is the direction I'm leaning / <--get it?
I wish I could channel Timmy. he makes awesome decisions. he decided to play harder than any other player and then he won the national championship.
Posted by Alison at 6:45 PM