her excellency the mayor 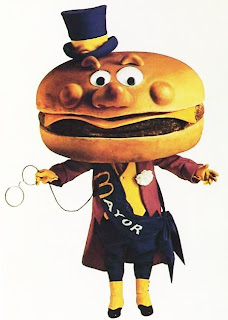 okay I couldn't find any other mayors except the mayor of the city of townsville and I laughed harder at this. if my friend cori can be the hamburglar then I can be mayor mc cheese.
anyway, I'm the mayor of sucktown more accurately. I had a horrendous day at UF that kicked me in the proverbial nads. I was so upset that to keep from crying in front of the rat bastard advisor in CLAS that I told him that he was basically telling me that I had a better chance of crapping a pot of gold. yeah, I said it. my fantastic plan of trying to change my major to history might just be that.fantastic as in a fantasy. I was told that this just wasn't going to happen due to my hours and it didn't matter that I had a physical condition and a doctors note that said that I can't complete my major and I need to change. yeah he said that a physical disability wasn't a good enough reason for an exception. I seriously almost cried. I'm still not over the disappointment and I'm pissed that I have to fight. I can't believe that I am pissed that I have to fight because I love a fight for injustice. I think what pissed me off was the attitude of the douchebag advisor that I met with. he was the poster child of a prick with an iota of power. he had absolutely no intention of being helpful. he didn't even tell me HOW to appeal. he only told me that it wasn't going to happen.
now that I am over my depression, I am ready to fight. and to quote my yummy Al Gore, " instead of science, I'm going with crazy" oh man did he look like a big steamin dish of yum last night on snl.
Posted by Alison at 8:42 PM